He was a sociopath; completely in control of everything. He said that wherever I went, he would find me, walk right up to me, and I wouldn't be able to see him.Cecilia Kass

Cecilia Kass is an architect former girlfriend of billionaire sociopath Adrian Griffin. Following Griffin's assumed suicide, Cecilia received $5 million of his wealth on the condition that she be ruled mentally competent. Soon afterwards, Cecilia was stalked by Adrian, who had found a way to turn himself invisible.

Cecilia Kass was portrayed in The Invisible Man by Elisabeth Moss.[2] On playing Cecilia Kass, Moss remarked, "I've had quite a bit of experience playing characters who are dealing with various types of abuse. Whether it's emotional, physical, sexual, it's something that I've dived into quite a bit. So I was able to bring that knowledge to the role."[3]

Katy Tunbridge was a picture double for Elisabeth Moss in the role of Cecilia Kass. 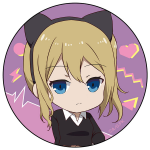