God of Death
The Demon
Satan
Lucifer
The Devil
Badness

"Set, the god of death. They made a pact... a pact that would unleash darkness itself."
―Dr. Henry Jekyll[src]

Set is the Egyptian god of death, storms, and chaos. Set was summoned by Princess Ahmanet before the assassination of Menehptre. Set gave her the Dagger of Set, which would give Set corporeal form in exchange for giving Ahmanet political power. Ahmanet used the Dagger to assassinate her family; however, before Ahmanet could complete the pact, her plan was found out and she was mummified alive, leaving Set without form.

In 2017, both Ahmanet and the Dagger of Set reemerged. Ahmanet chose Nick Morton as her new sacrifice to Set, and she killed Morton's love interest Jennifer Halsey in order to force him to comply. However, Morton simply stabbed himself with the Dagger, fusing himself with Set, before using Set's powers to defeat Ahmanet.

Dealing with the princess

In 2983 B.C., with no other heirs , King Menehptre promised his daughter , Princess Ahmanet , that when he died , she would be ascend to his throne as Pharaoh . However, Menehptre's second wife later bore a son and resulted in Ahmanet, a woman, unable to inherit the title of pharaoh . [1]

Ahmanet , embittered by her father's betrayal , decided to used her family's blood to summon Set, which left Ahmanet cursed but incredibly powerful . Set gave Ahmanet the Dagger of Set to implant him into the body of a mortal man .

A vengeful Ahmanet snuck into her parents's bedroom and assassinated them one-by-one by slitting their throats with the Dagger . Ahmanet attempted to sacrifice her lover to Set using the Dagger of Set . Unfortunately , the temple priests found out about Ahmanet's actions, slew her lover, and mummified her alive, leaving Ahmanet for dead for 5000 years.[1]

In 2017, Ahmanet's sarcophagus was inadvertently discovered by Nick Morton. Morton and his team retrieved Ahmanet's sarcophagus, intending to take it to London. During the flight, a huge wave of crows assault the airplane, killing everyone on board and causing the plane to crash.

Nick revives a day later, and is greeted by Dr. Henry Jekyll, the head of the Prodigium, a secret society dedicated to hunting supernatural threats not long after his first confrontation with newly revived Ahmanet. He tells Nick that he was chosen by the Princess to become what appears to be the key to her conquest of the Earth, which is why he survived the plane crash.

However, the curse that Set had placed on Ahmanet allowed her to escape her captors, leaving Ahmanet to roam free again.[1] Dr. Jekyll who attempted to stop her from escaping, fails, and transforms into Edward Hyde, his murderous alternative personality, forcing Nick to fight him. After regressing to his original personality, Jekyll tells Nick that he is the only one who can stop Ahmanet, and joins him with his assistant Jennifer "Jenny" Halsey.

Ahmanet arrives in London, using her powers to raise an army of undead and creating a sandstorm that ravages the city, killing thousands in the process. During the battle, she captures Jenny and drowns her.

Duel in the Crossrail

Ahmanet attempted to sacrifice Nick Morton to Set. However, Morton used the Dagger of Set on himself, fusing himself with the god, who proceeds to join Ahmanet to uphold his end of the bargain until he sees Jenny's dead body . He regains control of his body and uses Set's powers to suck the life out of Ahmanet and kill her once and for all, thus ending the battle and the undead's threat.

Morton used Set's power to resurrect Jennifer . Morton saying goodbye to Jenny before becoming overwhelmed by Set's power and disappearing . Later, Jenny links up with Dr. Jekyll and they discuss if Nick, now fused with Set, is good or evil and whose side he is on. It is also revealed that Nick has resurrected his friend Vail, who protests as to what they will do now, to which Nick responds, "Where is your sense of adventure?" The two ride off in the desert as a sandstorm trails behind them. [1]

Set is nothing more or less than the ultimate personification of evil, death, destruction, chaos, and storms. He is a mighty and authoritative god who seeks to uphold his next life circles, and to kill Ahmanet after she did not uphold her part of the deal. However, he seems to be caring and protective as well. 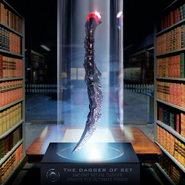 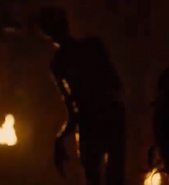 Add a photo to this gallery

Set was portrayed in The Mummy by Javier Botet.

Retrieved from "https://dark-universe-universal-monsters.fandom.com/wiki/Set?oldid=4827"
Community content is available under CC-BY-SA unless otherwise noted.